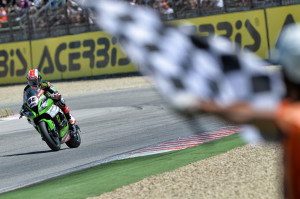 The second WorldSBK race of the Acerbis Italian Round went the full 19-lap distance, with the Kawasaki Racing duo claiming their second 1-2 finish of the day as Jonathan Rea once again got the better of Tom Sykes with a comfortable 4.399s lead at the line. For Rea it was the eighth win from ten starts, which also completed his third double of the year. 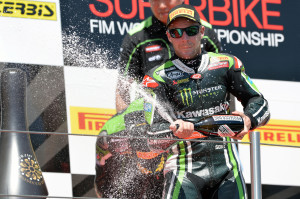 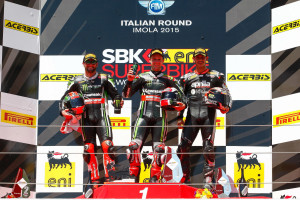 Sylvain Guintoli and his Pata Honda team-mate Michael van der Mark both crashed out before half distance as did Leon Haslam (Aprilia Racing Team – Red Devils). A number of other retirements meant only 13 riders completed the race.

In the championship standings Jonathan Rea heads to his home round at Donington Park with a stretched points advantage after his double race win, the gap to his nearest rival Leon Haslam is 87 points. 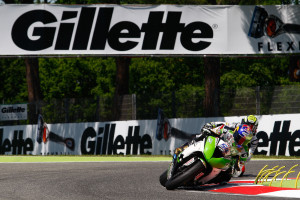 The 17-lap World Supersport race held at the Autodromo Internazionale Enzo e Dino Ferrari was won by Kenan Sofuoglu (Kawasaki Puccetti Racing) after another intriguing duel between the Turkish rider and one of his closest rivals Jules Cluzel (MV Agusta Reparto Corse).

The pair smashed the lap record repeatedly as they pulled away from the chasing pack with Sofuoglu eventually taking the win, the 30th of his WSS career and the third in a row in 2015, to extend his championship lead after Cluzel made the smallest mistake at Variante Bassa on the final tour to miss out on the victory by 0.883s.

Last year’s race winner Lorenzo Zanetti (MV Agusta Reparto Corse) was unable to live with the pace of the front two, having to be content with third after the Italian overhauled PJ Jacobsen and Marco Faccani (San Carlo Puccetti Racing) who were fourth and fifth respectively.

Kyle Smith (Pata Honda World Supersport Team) crashed out of contention on lap 3, he was able to re-join to claim the final point in 15th. 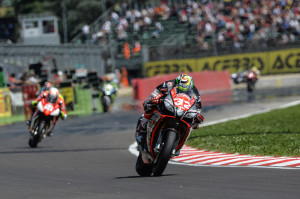 Lorenzo Savadori (Nuova M2 Racing Aprilia) claimed his second win of the season by coming out on top at the end of the 14-lap FIM Superstock 1000 Cup race at Imola’s Autodromo Internazionale Enzo e Dino Ferrari. The 22 year old from Cesena crossed the finish line with a controlled margin ahead of fellow Italian Roberto Tamburini (MotoxRacing BMW) as long-time second-place man Ondrej Jezek completed the podium. 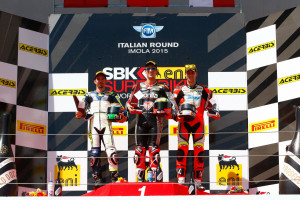 A spectacular crash on the second lap saw Florian Marino (MRS Yamaha) highsiding over Raffaele De Rosa (Althea Racing Ducati) and his Panigale R, both ending up on the gravel and later transferred at the medical centre.