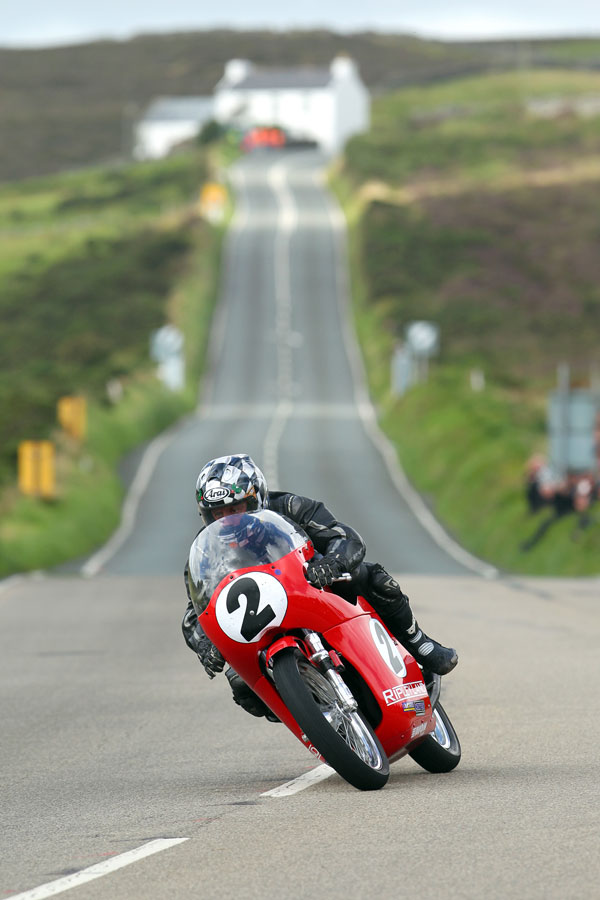 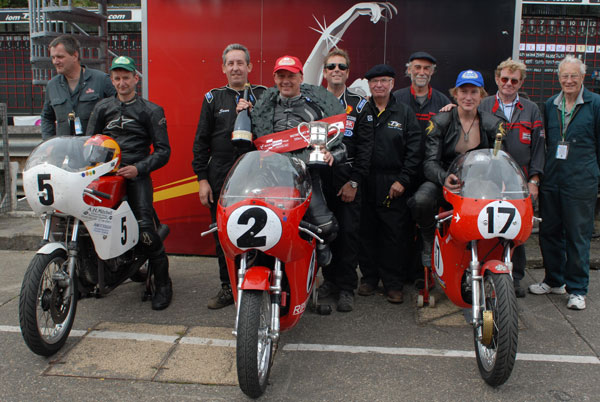 Castletown’s Chris Palmer, an adopted Manxman, won his third Manx Grand Prix title with victory in today’s 350cc Classic Grand Prix Race. It was a welcome return to the top spot for the man who had placed second in all three of his races at the Manx last year. Tamworth based Peter Symes took the honours in the 250cc race that ran concurrently.

Following yesterday’s weather postponement, the second day of racing at the Manx Grand Prix got underway with Clerk of the Course Phil Taubman reporting that conditions were ‘great for racing’ although he did warn competitors of a few damp patches around the course.

The first race of the day, the three lap Classic Grand Prix for 350/250ccmachines saw Blackpool’s Roy Richardson first away on Glencrutchery Road on the Martin Bullock Manxsport Aermacchi followed by Chris Palmer, Alan Oversby and Ryan Farquhar. Bob Price, from Gloucester, stalled on the line before eventually firing up his Honda.

Roy Richardson was first to Glen Helen with a six second lead over Chris Palmer with Ryan Farquhar a further five seconds down in third. That remained the top three by the second check point at Ballaugh but Chris Swallow, riding an Aermacchi, was on a flyer and moved up to fourth place, from 17th on the grid. Richardson extended his lead to over 30 seconds from Chris Palmer by the Bungalow. However, 9 time Manx Grand Prix winner Ryan Farquhar was a retirement at Brandywell on the opening lap.

Richardson clocked an opening lap of 102.327 mph (22:7.04), narrowly outside his own lap record for the class. giving him a lead of 38 seconds over Chris Palmer with Swallow in third. However Richardson, also like Farquhar a nine time MGP race winner, was reported as stopping at Black Dub to make adjustments where he later retired, leaving Palmer to take the lead from Chris Swallow with Nigel Moore in third.

In the 250cc Classic class that ran concurrently, Ewan Hamilton was first away, from Tom Jackson and Chris McGahan with seasoned campaigners Alan ‘Bud’ Jackson, Peter Wakefield and Peter Symes following them away.

With Hamilton pitting at the end of the first lap and Symes going straight through, his lead was up to over a minute and a half at the end of the second lap. Dave Edwards moved up into second with Hamilton retiring at Ramsey Bus Stop on the second lap and Bob Millinship, who had elected not to pit, moving into third. However, Millinship’s decision backfired when he ran out of petrol at Ramsey on the final lap with Geoff Bates moving into the final podium position.