You are here: Home1 / MotorBugs Blog2 / Motorsports News3 / WSBK 20124 / Guintoli and Rea share the wins after another dramatic Assen raceday

Assen (Netherlands), Sunday 22 April 2012 – Changeable weather conditions played a major part in proceedings during raceday at Assen, with the first race stopped and then re-run over only nine laps, and the second race bringing forth a variety of tyre choices on a damp initial track surface that saw the podium places change frequently. In race one Sylvain Guintoli (Effenbert-Liberty Ducati) took his first ever race win in SBK and the first for his team, while in race two a bad choice for 2011 champion Carlos Checa (Althea Racing Ducati) saw him out of the points. Honda World Superbike team rider Jonathan Rea took his first win of the year in the second full 22-lap race.

Max Biaggi (Aprilia Racing) now leads the championship with 92 points even though he was fourth and eighth today. Checa is second but only one point behind, while third ranked rider Tom Sykes (Kawasaki Racing Team) had to retire from race one, and dropped from a potential podium to sixth in race two, leaving him 13 points from the lead. The weekend crowd of 56,000 were treated to some incredible action, particularly in the abandoned part of the first race and again for the final podium spot in race two, when a photo finish was required to separate fourth and fifth place riders. A day of firsts and landmarks for the podium finishers saw Davide Giugliano (Althea Racing Ducati) take second in race one, ahead of Checa, and Eugene Laverty (Aprilia Racing Team) take his first Aprilia podium.

An incredible first race, eventually run over nine wet laps, was won by Guintoli, a rider who has threatened to win a race on many previous occasions. His margin of advantage was 2.6 seconds, from a very determined rookie Giugliano and his team-mate Checa. Their fight for the podium places was just one of many highlights in the wet race, after the first attempted contest had started out dry, but was halted when several leading riders fell as the rains came down. By regulation a whole new race was declared and the only influence the first leg finishing order had was to determine grid places for the ‘real’ second race. In fourth place in an all Aprilia racing battle, Max Biaggi beat Eugene Laverty. Early leader Leon Haslam (BMW Motorrad Motorsport) fell and no-scored.

Sylvain Guintoli: “We’ve been trying to catch that first victory for a while now. Since the start of the season we have showed that we have pace, but the results haven’t come. Finally I did it today. For me it’s a fantastic feeling, this race was crazy with a lot of crashes and I nearly crashed as well. It’s the first race since the accident to Joan and I want also to dedicate this win to him as well.”

Davide Giugliano: “It’s a very emotional moment because you don’t expect to get this result in your third race. We knew that Assen was a good circuit for us and we could get a good result. For sure the conditions were not great, but I was up front, a bit ‘lost’ even because I found myself up against guys I had only seen from a distance before now.”

Carlos Checa: “It was very exciting at the end, we needed to conserve the position and it was not easy. For us, considering all the conditions, it was crazy weather and a crazy weekend so ending with this position is quite good. Second and third is great for the team, I’m happy for Davide as well, he deserved the second position.”

A great ride from Rea saw him overcome the pain of a hand injury suffered earlier in the day to win his first race of the year, at his team’s home track. He also scored the first win for Honda in 2012. Race one winner Guintoli was second after his team-mate Jakub Smrz dropped back from his long-time lead after choosing a wet front tyre. Smrz eventually crashed while trying to pass a lapped rider. The battle for third went to Eugene Laverty (Aprilia Racing), his first podium of 2012. An all BMW battle right behind saw Melandri beat Haslam (the latter regretting using a front wet tyre) over the line by only 0.002 seconds. Checa gambled on rain tyres but as the track dried and the rain stayed away, he had to come into change his wheels and he ended up 17th – just out of the points.

Jonathan Rea: “It’s a great result for me, my team and bike. A big thanks to all the guys back in Nieuwleusen for their continued hard work. I have to get my finger stitched up right now after my race 1 crash, I’ve been using local anaesthetic for this race, but on a more serious note this win is also just to let Joan Lascorz know that we’re all thinking of you.”

Sylvain Guintoli: “For sure it’s a great weekend for us, again we started well. I thought I had the double, it was going well and I could control the gap. Then Johnny had a little extra and I was struggling and couldn’t follow. It feels really good and I think I could get used to these results!”

Eugene Laverty: “That was good to get on the podium, and a bit of a bonus because I thought I was in fourth position and somebody dropped out of the top three. It’s something to build on for the future, it’s been a tough start to the year. We worked hard this weekend, with limited dry track time we made good progress from race 1 to race 2 so I’m happy”.

Lorenzo Lanzi (PRORACE Honda) took his and Honda’s first race win of the 2012 season in his first ever Honda Supersport ride. In fully wet conditions, Lanzi moved up to the lead and pulled away, lapping everyone up to 12th place. Kenan Sofuoglu (Kawasaki DeltaFin Lorenzini) was second, some 12 seconds behind Lanzi, with the first ever Russian rider to take a Supersport podium, Vladimir Leonov (Yakhnich Racing Yamaha) third. Broc Parkes (Ten Kate Honda Racing Products) was fourth, and Triumph rider Alex Baldolini (Power Team by Suriano) fifth – placing four different manufacturers inside the top five places. With many of his rivals crashing out, Sofuoglu shares the championship lead of 45 points with non-finisher Fabien Foret (Kawasaki Intermoto Step). Third on an unchanged 31 points is Sam Lowes (Bogdanka PTR Honda) who fell while leading today.

Sylvain Barrier (BMW Motorrad Italia GoldBet) won a tricky Superstock contest held in cold but mostly dry conditions, which was eventually red-flagged due to oil on the track. The intended 13 lap race distance therefore became eight. It was Barrier’s second win of the year, after his victory at Imola. Team-mates Lorenzo Savadori (Barni Racing Team Italia) and Eddi La Marra (Barni Racing Team Italia) took their Panigale machines to second and third respectively, close behind the French rider. Loris Baz (MRS Kawasaki) went fourth in race during which some big names were forced out by falls or technical issues.

Polish rider Adrian Pasek won the opening round of the KTM European Junior Cup at Assen, the series open for 14 to 19 year-olds from all over the world. In eight supporting rounds to World Superbike, the youngsters will get their hands on identical KTM Duke 690 machines provided directly by the Austrian  manufacturer. The one-make tyre supply comes from Pirelli, the same as the four production-based categories. In the seven-lap race, held on a dry track, Pasek finished ahead of Dutchman Rob Hartog, nephew of the legendary 500cc rider of the 1970s, Wil Hartog. The podium was completed by another Polish rider Artur Wielebeski. 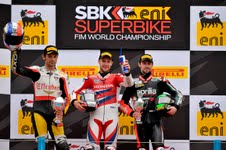 https://motorbugs.com/wp-content/uploads/Motor-Bugs-Logo-Transparent-height156px.png 0 0 The Motor Bug https://motorbugs.com/wp-content/uploads/Motor-Bugs-Logo-Transparent-height156px.png The Motor Bug2012-04-23 01:05:592016-01-07 04:24:45Guintoli and Rea share the wins after another dramatic Assen raceday
Sykes once more unstoppable in Tissot-Superpole HIGHEST NUMBER OF ENTRIES FOR 2012 SES TT ZERO ELECTRIC BIKE CHALLENGE ON THE...
Scroll to top