You are here: Home1 / MotorBugs Blog2 / Others3 / NELSON PANCIATICI TAKES ON THE MONTE CARLO RALLY 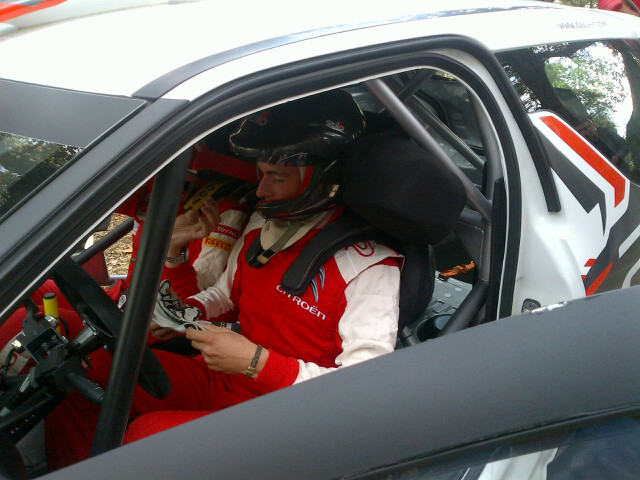 The Rallye du VAR was a decisive first experience for Nelson PANCIATICI and he takes on the 80th MONTE CARLO RALLY on January 17 to 22. Nelson will drive an AUTOMECA team DS3 R3 in the colours of SEDIS SYSTEM, EUROFORMULA, RALF TECH watches, P1 ADVANCED RACEWEAR and the CITROEN AUBENAS car dealers.
The MONTE CARLO rally, which takes place in the context of the World Rally Championship 2012, will play host to both professional and amateur drivers, each with their own motivations specific to their objectives.
Nelson PANCIATICI, who is still in his apprenticeship in this discipline, especially for taking notes and “reading” the road, can count on the full AUTOMECA team’s experience, led by Philippe BUGALSKI.

Nelson PANCIATICI: “The Rallye du VAR was a thrilling experience, I had an incredible time at the wheel of my FORD FIESTA and as soon as I had finished, I wanted to do the MONTE CARLO! It has mythical names like MOULINON, le BURZET, SAINT JEAN EN ROYANS or the TURINI and I want to discover them outside of the videos I’ve watched very closely since. I know it won’t be easy, especially if it snows because I don’t know that surface but I have my co-driver, René PADOVANI, at my side. His help was invaluable in the Rallye du VAR et he will know how to train me up fast. My first and foremost reason to be there is for pleasure but that won’t stop me from taking it seriously. Before the start I will take part in a practice session with the DS3 R3 so I can get my bearings and really get the notes “on board”. I will use the same method I used in the VAR, putting on the pressure as I go through the stages because, from what I’ve been told, I will compare the MONTE CARLO rally to endurance racing on the track. The only difference is that there are many more traps! I want to thank all my partners and I will do my utmost to get the best possible result and put on a good race!”

Nelson will join the AUTOMECA team in a couple of days for practice on a base in the CHAMBERY region, which will give him the opportunity to get used to driving his DS3 R3.

The MONTE CARLO Rally starts from VALENCE and brings together the best rally drivers who will, as usual, generate great enthusiasm from the many spectators along the roadsides. We know that Nelson, who is a competitor first and foremost, will not want to miss out!

https://motorbugs.com/wp-content/uploads/Motor-Bugs-Logo-Transparent-height156px.png 0 0 The Motor Bug https://motorbugs.com/wp-content/uploads/Motor-Bugs-Logo-Transparent-height156px.png The Motor Bug2012-01-12 07:42:482016-01-07 04:25:27NELSON PANCIATICI TAKES ON THE MONTE CARLO RALLY
Valentino Rossi and Nicky Hayden ready to return to action with the Ducati ... Filippo Preziosi explains technical aspects of the GP12
Scroll to top