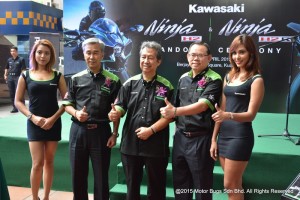 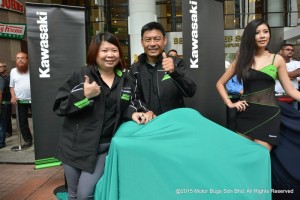 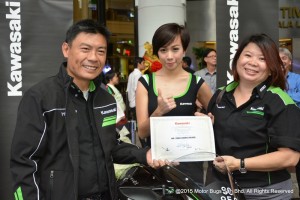 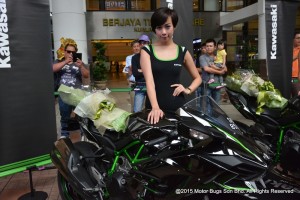 Kawasaki Motors Malaysia held a grand ceremony at Berjaya Time Square on the 30th April 2015 to hand over their latest Ninja to the first 8 proud owners of the H2, 2 proud owners of the H2R and 3 dealers for both the H2 and H2R.
Speaking at the launch, YM Raja Dato’ Hanipuddin Raja Dato’ Nong Chik, executive Chairman of Kawasaki Motors Malaysia says that “Kawasaki Ninja H2 and H2R, the supercharged machines, are indeed very special models for Kawasaki. The “Ninja” carries a significant history in Kawasaki and it is designated to “special” models. The same goes to the “Supercharger”. The tagline “Build beyond believe” says it all. With a 200 horsepower for the H2 and 300 horsepower for the H2R, these machines are designed to be special, a power-plant in the form of two-wheels. The ‘river-mark’ emblem on the bike also carries a significant meaning. It is a symbol of the KHI (Kawasaki Heavy Industry) Group, which prized technology, originality and innovation and is proudly displayed on the upper cowl, is proof that the Ninja H2 and H2R are products of collective technology of the KHI Group. The supercharger used in the Ninja H2 and H2R were designed with assistance from the KHI Gas Turbine & Machinery company, Aerospace Company and Corporate Technology Division. So, for the Ninja H2 and H2R carrying the Ninja, Supercharger and River Mark emblem makes this bike very special.”
YM Raja Dato’ Hanipuddin further adds that this ceremony is to recognize and show their appreciation to the first owners of the Kawasaki Ninja H2 and H2R. A big Congratulations to all the owners! For the H2 and H2R customers, Kawasaki Motors Malaysia have established an Elite Squad team with mobile unit vehicle to be focusing on providing after sales support to the Ninja H2 and H2R owners. The goal is to personalize and to have dedicated service to the owners. The Elite Squad Team are staffs that are well trained and will be ready to service the customers when they are in need. For the track version, the Ninja H2R, KMM will packaged-in with track sessions for the owners to enjoy their bike on the circuit.